The Association held its 36th Annual General Meeting on Saturday 12th June, which is also the anniversary of its foundation in 1985.

The AGM reconfirmed the committee members who were appointed at the previous AGM, with Stephen A. Petroni as President, Shane A. Hunter as Secretary, Josef Galea as Treasurer and Peter Paul Caruana and Fabrizio Farrugia as members.

To mark the occasion of the Association’s 36th anniversary, members set up a mini exhibition of edged weapons at the AMACS premises in Tigne’ Point. The organisation of this event was entrusted to Battlefront Living History Group, which forms part of the Association’s structure. The display included a few bayonets and dress daggers. 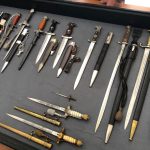 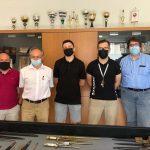